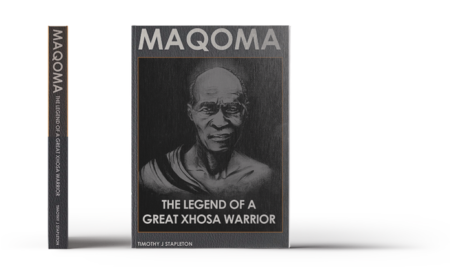 Maqoma – The legend of a great Xhosa warrior

Maqoma-The Legend of a Xhosa Warrior is a book that does not shy away from controversies but rather confronts them which makes for a great thrilling and thought-provoking read. The book is rich in detail, informative and provides a new understanding of our historical leaders, their family structure, internal politics and power dynamics. It is undoubtedly provocative, timely, and immensely rewarding reading which looks at a man on the ‘edge of politics’. For that reason, the book is a potent combination of precise history and moving examples, plus a useful chronology of events.

Maqoma was the most renowned Xhosa chief of South Africa’s 19th century Cape-Xhosa Wars and arguably one of Africa’s greatest resistance leaders of the colonial period.
Born in 1798, he was the Right Hand Son of Ngqika, King of the Rharhabe division of the Xhosa nation. He was a man of considerable intellect and eloquence, striving to maintain traditional social structures and the power of the Xhosa royalty in the face of colonial depredations and dispossession.
He led Xhosa resistance forces in three separate wars against the British-ruled Cape Colony. Maqoma used his skills as general and tactician to lead a guerrilla campaign in the forested mountains and valleys of the Waterkloof.
Evidence suggests that Maqoma made covert attempts to undermine the Nongqawuse Cattle Killing Prophecies of 1856-57 which brought devastation on the Xhosa nation.

Imprisoned on Robben Island for 12 years, Maqoma was paroled in 1869. When he attempted to resettle on his stolen land, however, he was re-banished to the infamous island prison, where he died under mysterious circumstances in 1873.
And yet his name lives on. In vivid prose the author records the life of a leader who had extraordinary tenacity, flexibility, political and martial skills, who tragically became the victim of colonial domination.

Did you find apk for android? You can find new Free Android Games and apps.

1 review for Maqoma – The legend of a great Xhosa warrior

This is a short description